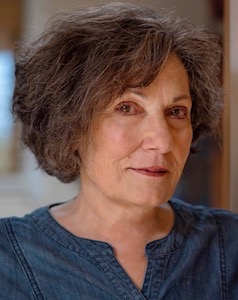 Hailing from Mount Vernon, NY, a suburb of New York City, Karen Cantor received a BA cum laude from Goucher College – majoring in anthropology and minoring in fine arts – and 20 years later got an MBA from Wake Forest University.  During the 20 years she had lived in North Carolina, she became well known for her industrial and artistic photographs.  Her work experiences also include serving as a marketing director and consultant for high-tech firms and teaching photography and entrepreneurship at Elon College and American University.  As Karen, herself, says: “When I made my first film I knew this is what I wanted to do. Now, as an established filmmaker, I am well aware that my eclectic experiences have each made significant contributions to honing my skills and world view.”

ARTIST’S STATEMENT
I came highly motivated, but late (I’d just become a grandmother), to documentary filmmaking.  From childhood on, I found myself to be doubly blessed with having a good “eye” and being a natural storyteller.

My personal journey has been marked with an affinity for both the visual arts and social issues. As a professional photographer in Statesville, North Carolina, I focused on everything from industrial shoots to family portraits to creating photographs as art.  I began making slide shows as part of this work and soon realized how much I was drawn to producing audio-visuals. When I came to Washington, DC to work, I soon realized it was a great place to study filmmaking.   At the George Washington University Historical Documentary Film Institute I served as a co-writer on a student film along with Camilla Kjaerulff, a Danish national.  We so enjoyed working together that subsequently we co-produced and co-directed The Danish Solution, which was released in October 2003 on the 60th anniversary of the rescue of the Danish Jews. The documentary dispelled myths surrounding the rescue and accurately told a miraculous story. We were delighted with the excellent reception the film enjoyed:  it was screened in film festivals as well as broadcast throughout Europe, in Israel, and on many PBS stations in the United States.

In 2009 my second documentary was released.  Produced in association with Mississippi Public Broadcasting, Last Rights: Facing End-of-Life Choices is told by the beloved family members of four terminally-ill people who made different choices at the end of their lives.   Initially focusing on Jack Kevorkian. I soon realized the film was not about Dr. Kevorkian, but rather about people battling fatal illnesses, some of whom sought help to die.  The more I have learned, the more experts I have interviewed; the more I am aware that there are no easy answers.  Every individual’s path is unique. Rather than squelching any particular belief and/or line of reasoning, I believe all will benefit from airing all sides of the issue.  It is a privilege to help people become aware of the choices at the end-of-life.

Invitation to the Muse arose from my awareness that the creative process, itself, requires a sequence of informed decisions. While I am committed to making documentaries that deal with moral choices, the very challenge of making choices is the essence of many human dilemmas.  Presented with the opportunity of becoming an artist-in-residence at the Santa Fe Art Institute, it seemed the creative process should be the subject of my next documentary. I proposed a film about artists and inspiration focusing on core creative processes and witnessing how a variety of artists approach their work. I was – and am – very aware that for this filmmaker the muse generates sparks in the research and planning process but especially revels in editing sessions.

Now that I have moved to New Mexico, I have become more and more aware of Native Americans: their lives today, the complicated histories, the many contemporary tribes, and the plaguing dysfunctions besetting some. RETURN is about six contemporary Native American women leading their communities to reclaim health and spirit through traditional ways.

What is important to me is to contribute to the debate of relevant issues and encourage compassion, tolerance, and civic engagement – whether these be issues of life and death or those of everyday life.  My intent is to produce engaging films with high production values and compelling storytelling.  I want to pique viewers’ interest so that they are inspired to learn about the issues while simultaneously questioning their own beliefs about the world.